The conference started today. I’ve realised Arab time is very relaxed. When they say, meet in the hotel foyer at 8.30, it means I am there with my Scottish Calvinist conscience, but nobody else is! The conference itself began with coffee and pastries, then eventually we moved into the conference theatre. The stage with its four white chairs was quite daunting, as was the huge overhead screen showing each speaker - I would be up there the next morning, in far too much detail.

I’m hugely impressed by the academic and intellectual abilities of the other speakers, who all have a deep understanding of Arabic literature. They discussed the general problems of translation, why it’s important, and what should and should not be translated from Arabic. We also heard about ‘Banipal’, an influential magazine published in English, containing work by Arabic writers. It’s a vital source for publishers who want to find out find out more about Arabic literature. www.banipal.co.uk

More than one speaker expressed anxiety about the way Arab countries, and Islam, are perceived in the west. They hope that increasing the translation of Arabic literature into other languages will help to dispel these stereotypes, and improve understanding. 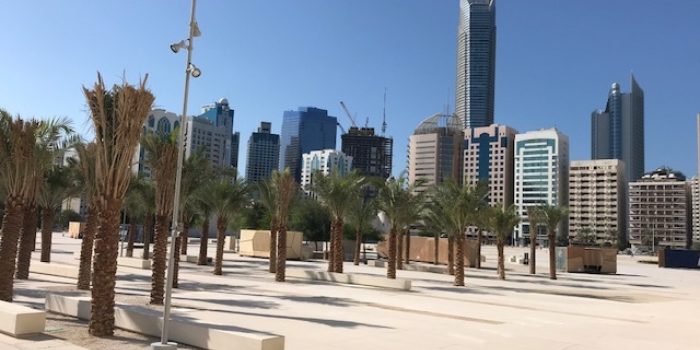 At the end of the day we were taken to the Grand Mosque, which is on a vast site. When you use the public entrance (there are separate entrances for their royal family and visiting heads of state), it’s rather like going into a modern, well kept airport. Shops and cafes give way to long walkways, until at last you find yourself at the entrance to the mosque itself. There is a ‘dress inspection’ before you can go in. Men must cover arms and upper legs; women must show only faces, hands and feet. Our guide gave me an abaya, a long black gown with gold embroidery on the sleeves, and a black gauzy hijab. We may view ‘covered’ women with scepticism in the west, but after only ten minutes or so, dressing like this feels normal, especially as you’re surrounded by other women wearing similar robes. The loose gown stirs in the faint breeze and is really comfortable to wear.

The Grand Mosque is spectacular. From the white and gold marble pillars to the inlaid marble flowers, the sparkling crystal chandeliers and the flower engraved windows to the magnificent 5,000 square foot carpet in the main prayer hall, it’s stunning. The main prayer hall is used weekly, and all through Ramadan. Women have a separate prayer hall. 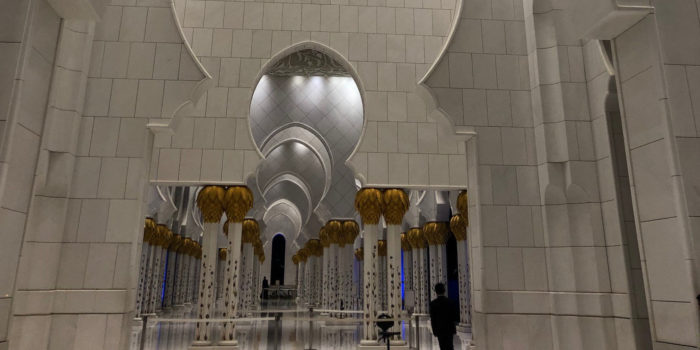 Dinner was informal, in the hotel restaurant, giving the speakers more time to talk to each other. I love being part of a multi-language, multi-cultural, world wide group as we are here. As I do at Frankfurt Book Fair, I understand all over again that books and literature are what we have in common, something we all care about.