Publishing Director Moira Forsyth is in Abu Dhabi for the Abu Dhabi International Translation Conference this week. Keep an eye on our blog and our Instagram stories to see what she's up to!

There is something magical about arriving in a new city at night, and being driven along quiet avenues, the road signs in an unknown language, palm trees stirring in a hot wind, past great buildings whose function is unknown, their domes and towers and pillars glimpsed only, lit from beneath in orange and pink, the glow of neon. After the roar and drone of the aeroplane the huge black car is almost silent, gliding towards the hotel.

In the magnificent foyer, marble and cool, I have suddenly the sense of being in a dream. Long flights are disorientating: in that airborne capsule you might be anywhere at any time, but after several hours that starts to feel like reality.

The conference starts tomorrow, and so far I’m not needed for anything today, but the lack of sleep over the last thirty-six hours or so has begun to catch up with me and I’ll be glad to be lazy. I was greeted with great friendliness and courtesy at the airport last night, and also at the hotel, and given, as I waited at reception, a fruit drink that was perfection - sharp and sweet and fresh. 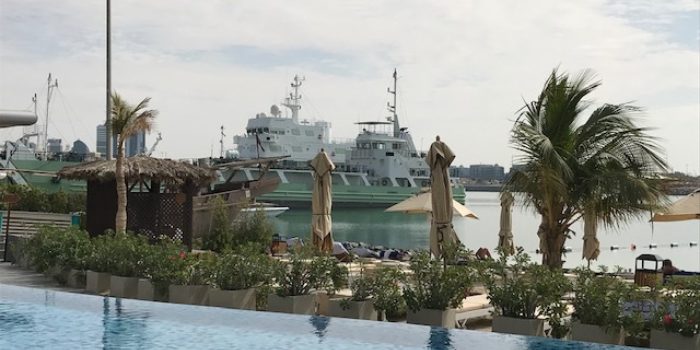 Abu Dhabi is clearly a popular holiday destination: most of the guests are tourists, and the bottom floor of the hotel leads to swimming pools and a beach with umbrellas. The driver last night told me he had come here to work from Pakistan over twenty years ago. He says it feels safe, open and friendly. The traditional male dress of a long white rope and a white cap or headdress are not worn by everyone, but could be seen at the airport, and also in the hotel. Some women are covered, but not the hotel staff. Breakfast was a buffet of breakfasts from all over the world, to suit the cosmopolitan range of visitors. 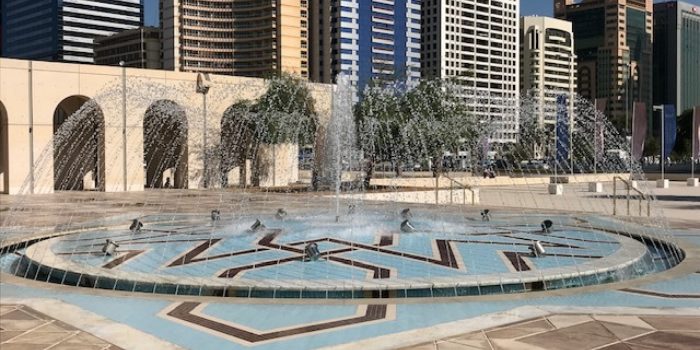