On The Blog: The Cost of Living (An Ant and Bea Mystery) 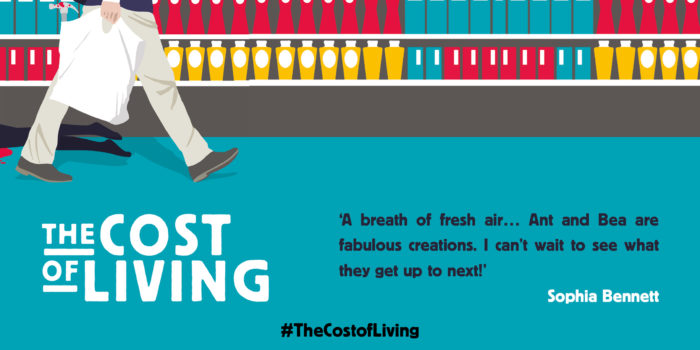 Bea spent a restless night. As she tried to drop off to sleep she was haunted by her stupid impulsive behaviour. She had had Julie’s ring in her hand and she gave it away! To Ant! What was she thinking? Let’s face it, he wouldn’t be back at work tomorrow, so then what would she do? Find out where he lived and go and see him? Plead with him? Buy the ring back herself? And what if he’d already got rid of it?
She tossed and turned, and when she finally drifted off, her sleep was tormented by twisted hobbity nightmares – a gold ring, dragons, dwarves, freezers and mops. She woke up at half past five in a hot sweat. As her eyes flicked open she remembered what she’d done.
‘Stupid. Stupid. Stupid,’ she said out loud, then looked at
her alarm clock and groaned, and however much she tried
she couldn’t get to sleep again.

‘You all right, love?’ Queenie asked as Bea shuffled into the kitchen at quarter past seven. She’d set the table for breakfast like she did every day: boxes of cereal in a neat row, milk in a jug, bowls, plates, spoons and knives at the ready. ‘Reckon you’re a bit out of sorts, what with forgetting the rice yesterday, and now not sleeping. I heard you get up and go to the bathroom this morning. What was it? Five o’clock?’
Bea sighed. She loved her mum, but despite all the evidence over the years, Queenie had yet to grasp that Bea wasn’t a morning person. What bliss it would be not to have to talk at least until after her first cup of tea. All she could manage today was a sort of grunt as she sat down opposite her and reached for the Rice Krispies.
Later, as she walked to work, she felt a twinge of guilt. Her mum probably wouldn’t talk to anyone else until she
came back from the supermarket in the evening. She should have made more effort. She’d try harder tomorrow.
In the staff loos Bea leaned close to the mirror. Her golden rule for bad mornings was to dab a good layer of concealer under her eyes, make the eyeliner thicker, add a jaunty flick at the corners and stick on bigger lashes. Despite the little pink veins sullying the whites of her eyes, she wasn’t looking half as bad as she felt.
A cistern flushed behind her and one of the cubicle doors opened. Dot emerged, looking immaculate as ever – her uniform crisp, her hair lacquered to perfection, her nails glossy and red.
Bea had a sudden flash of insight that she was looking at her future. She wouldn’t mind looking that good at
fifty-eight, but did she still want to be at Costsave?
‘Rough night, doll?’ said Dot.
‘How can you tell? Do I look minging?’
‘No, you look lush as ever, but you’ve got your megalashes on. I know you.’
‘Yeah. Thank God for these babies.’
Dot washed her hands, then joined Bea at the mirror.
‘You all right?’
‘Yeah. Just couldn’t sleep. The thing is, I did something yesterday—’ She stopped. What was the point of  telling her?
The ring was gone, wasn’t it?
‘What?’
‘Nothing. Doesn’t matter.’
They walked into the staffroom.
‘No sign of Ant, then,’ Bea said morosely. ‘What did I tell you?’
Dot tilted her head towards the corridor.
‘He’s in with Gav,’ she said. ‘Turned up five minutes before you did.’
Bea looked at her.
‘Close your mouth, love,’ said Dot, with a little smile of triumph. ‘Slack-jawed isn’t a good look on anyone.’
She checked her watch. ‘Time we weren’t here. Ready for another day in paradise?’
They made their way onto the shop floor with everyone else. Even though it felt like she’d been here forever, even though it was a middle-of-the-range supermarket not Harrods, even though the first customer through the door would be Smelly Reg here to buy his Racing Post and a packet of fags like he always did, Bea still felt a tingle of anticipation in the minutes before the store opened. She made herself comfortable at checkout six, adjusted the chair back to where it should be, punched her ID into the screen and put on some hand cream. Beside her, Dot stretched out her arms and wiggled her fingers like a concert pianist
preparing for bravura performance.
‘All right, Gav?’ Bea called out to their manager as he bustled along the row of tills towards the front door, a
bundle of keys jangling at his waistband. He always liked to do the unlocking himself.
He winced visibly. ‘Mr Howells, please, Beatrice. You know the rules.’
‘Yes, Mr Howells. Sorry, Mr Howells.’
Dot raised her eyebrows and wagged a finger at Bea. ‘Youth of today. No respect.’ She winked.
Bea spotted Ant at the far end of the aisle opposite her. He appeared briefly, pushing his cleaning trolley towards the fresh veg section. He wasn’t shuffling today. There was something jaunty about the way he was moving – it was almost a swagger. He glanced in her direction. She was embarrassed to be caught looking, but he grinned and gave her the thumbs up. Bea shook her head, smiling. He’d done it, then. Good for him.
The morning started slowly. Bea had a few of her regulars through – the ones that looked out for her and came to her checkout even if there wasn’t a queue at one of the others. She liked to think of it as building a fan base. A smile here, a compliment there, went a long way. Some of the over-sixties liked to flirt with her. She didn’t mind it up to a point, encouraged it even. It all helped to make the day pass more pleasantly.
She didn’t see Julie until nearly lunchtime. She was pushing Tiffany in her pushchair with Mason trotting along
beside her, trying to keep up as she powered up and down the aisles putting a few bits and bobs into a basket. Bea lit up her checkout number to summon the floor manager. It was Neville again today, clipboard clasped firmly, biro at the ready.
‘The woman with the pushchair and the little boy, the one in the leather jacket—’
‘Yes?’
‘She lost her wedding ring, but Ant found it and gave it to Ga— to Mr Howells. Can you go and tell her?’
‘Yes. Right.’
Julie was walking rapidly away from them. Neville ducked down the next aisle aiming to intercept her at the other end. Bea leaned sideways as far as she could, but she couldn’t see what happened next. A couple of minutes later there was an announcement over the tannoy.
‘Cleaner to management suite. Cleaner, Anthony, to the management suite, please.’

At lunchtime, Bea found Ant in the yard again. It wasn’t drizzling today, but there was a cold wind whistling through the metal gates.
‘You on your break too?’ she said.
‘Yeah. No. Bit of a nicotine top-up.’
She didn’t bother pointing out the sign again.
‘You brought it back then?’
‘Yeah.’
‘She was dead chuffed, you know. I could see when she came out of Big Gav’s office. You did a good thing there.’
There was a pause, then, ‘So did you. You made me think.’
‘What?’
‘You made me think what it would be like to be her. To lose something that means so much to you. Ach, sounds soft when you say it out loud.’ He couldn’t meet her eye, and instead looked at the ground and scuffed his toes in the gravel.
Bea looked down too. She was wondering what it would feel like to love someone so much you’d want to wear their ring. She wondered if it would ever happen to her.
‘Mr Howells was well pleased,’ said Ant. ‘Treated me like some sort of hero.’
‘Good. That’s nice. You can’t call him that, though,’ said Bea. ‘Everyone calls him Gav to his face, Big Gav behind his back. It’s the rules.’
Ant grinned. ‘I like those sort of rules. They’re the sort I can sign up to.’
He held his hand up and, again, Bea found her hand moving to meet his.
The door to the store was open. The sound of the tannoy drifted out. ‘Cleaning team to aisle four. Cleaning team to aisle four.’
‘Uh-oh,’ said Bea. ‘That’s not good.’
‘What do you mean?’
‘It’s code. “Cleaner” is food spillage. “Cleaning team” is something biological – urine, vomit, and if you’re very
unlucky, poo.’
‘You’re kidding?’ He searched her face, looking for telltale signs of a wind-up. Finding none, his shoulders sagged. ‘Oh crap.’
‘Very likely, mate. Welcome to paradise, Ant.’

Want to read more? Get the book here: https://amzn.to/2MPM9t7