'Touching portrait of a marriage'

THE opening two chapters of this novel are a startling compression of the lifelong connection between a couple. The first is set in San Francisco in February 1950. Billie is an idealistic young typist in the copywriting department of a petroleum products company, who wants nothing more than to be married with a child, and has already decided that making some man happy will be her vocation. She is introduced to the newest employee Jacko, a reliably cocksure type, a couple of years her senior. The encounter, decidedly cool at first, blossoms quickly into a first date, then to marriage, in 1952.

The second chapter, set in July 2014, sees the couple – now Milly and Jack – in their unappetising dotage. Milly has incontinence aids protruding from her. Jack, who has suffered a stroke, needs pills for various ailments. He can feel the vibrations of Milly’s clanking mechanical progress down the hall. They snipe tersely at each other.

The rest of this intriguing, thought-provoking novel goes back in time – seven years, three years, two years – all the way to that very first encounter at the dawn of the fifties. Milly and Jack grow younger with each jump-cut. Their family – their own children, plus the two boys of Milly’s carefree sister, who move in with them – feature more and more. We go deeper into Jack’s and Milly’s characters, into the ties that bind and the petty mutual antagonisms that chafe at them.

What also becomes evident are the faultlines in the marriage – any marriage, when it comes to that. How do you make love last, Jones asks in an afterword, even when it feels like hatred?

Jack – Jacko – is unashamedly self-centred, and he has put Milly through the mill. There is a child by another woman, for a start. He genuinely cannot see what his wife does all day, merely running the house. He controls the household budget with what might be termed an inflexible attitude, as he is the sole wage-earner. He is scornful of his wife’s lack of interest in things and, much more damagingly, is callous when she attempts to deal with a private tragedy.

And when his and Milly’s first grandchild is born, while Milly feels instinctively that this was why she got married and had children, Jack doesn’t give the new arrival a second’s thought, preferring to channel his emotional energies into trying to sign up a young Asian lesbian novelist for his publishing imprint.

However, we also glimpse, here and there, the other side of Jack: his time as a publisher, his love of reading, his dreams of writing a great novel.

In time we also learn the calamitous reason for Milly’s infirmity. Generally, Milly is a likeable, dreamy soul who, at one point in late 1963, when she was still known as Billie, and was attracted by the allure of Jackie Kennedy in the White House, compiles a list of the things they have in common. “Names – 2 syllables”, she writes. “Both names end in eee sound. Billeee. Jackeee.” She muses that both she and Jackie are married to charismatic, powerful men. 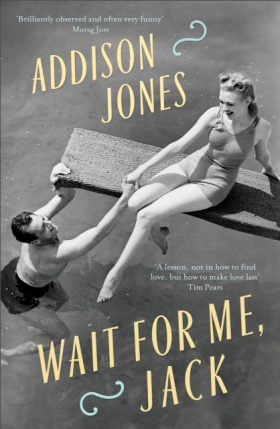 Jones (the pseudonym of Cynthia Rogerson), who herself grew up in California, does a skilful job in negotiating the plot in reverse, building up a detailed picture of a marriage, tracking it right back to their honeymoon, all against a shifting backdrop of American culture and recent history. Jack caustically observes in 1982, for instance, that the Republicans are back in control again, via “that greasy Reagan and that racist Bush.”

This is a frank, earthy and occasionally drily amusing portrait of a marriage, from the becalmed middle-aged years to that poignant stage in later life when the kids are like strangers to their parents and it’s just the pair of them at home, at the mercy of their physical ailments, withholding pleasure from each other (as Jones writes) for as long as possible, almost as a matter of course.

Jack is 80 years old when he reflects sourly that he is “trapped in a house with a crippled wife who often made him feel cranky, sulky and sneaky”. Seven years later, however, while acknowledging that he had been in a bad mood for so long that he could not remember not wanting to strangle his wife, he still loved her, dammit.

So love can survive, then. But the overarching theme of Wait for Me, Jack is illustrative of the essential truth of the epigraph used here, voiced by Dr Marie Stopes as long ago as 1918: ‘It is never easy to make marriage a lovely thing’.

Published in The Herald, 7th January 2017