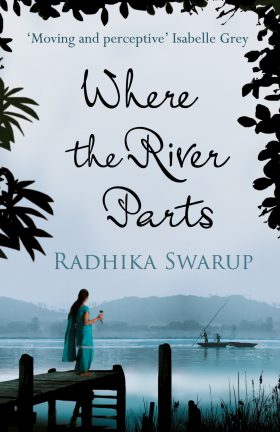 Where the River Parts

Blood had begun to trickle down Asha’s starched cotton salwar, and once more she tried to will herself to stay calm. It was nothing. These things happened.

But these things haven’t happened before. It’s August 1947, the night before India’s independence. It is also the night before Pakistan’s creation and the brutal Partition of the two countries. Asha, a Hindu in a newly Muslim land, must flee to safety. She carries with her a secret she has kept even from Firoze, her Muslim lover, but Firoze must remain in Pakistan, and increasing tensions between the two countries mean the couple can never reunite. Fifty years later in New York, Asha’s Indian granddaughter falls in love with a Pakistani, and Asha and Firoze, meeting again at last, are faced with one more – final – choice. 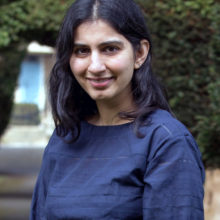 Radhika Dogra Swarup spent a nomadic childhood, growing up in India, Italy, Qatar, Pakistan, Romania and England, which gave her a keen sense of place and for the dispossessed. She studied at...

‘A chapter of South Asian history that has often been deemed too painful to be explored fully.’
-Nayomi Munaweera, Island of 1000 Mirrors

‘The aroma of saffron, cumin, turmeric and a sprinkle of dried ginger embraces Where the River Parts with history, sorrows and an ultimate understanding of love . . . a love that goes beyond the borders of war and threats of hopelessness. Dhanyavaad, Radhika Swarup, thank you.’
-Michele Zackheim, The Last Train to Paris

‘Spanning continents and generations, Where the River Parts is an epic tale of love, loss and longing. It is also a paean to hope and friendship. It is undoubtedly a mature and confident literary offering from a writer who has announced her arrival in the world of quality fiction with a great new novel. Simply put, “Where the River Parts” is a delightful read. ’
-India Strategic

‘It’s an examination of the choices a woman might make to survive in a world that’s hostile towards her. While the men fight, organise and do business, Asha has to work out how to make it to tomorrow. The book also considers how the choices made – by society as well as parents – affect the beliefs and actions of future generations.’
-Naomi Frisby

‘This is a beautifully written book, immersing you in the detail and mores of each of the very different settings and periods. ’
-Historical Novel Society

‘Though not a new story, for someone looking to explore Partition literature, Where the River Parts may be worth reading to get a sense of the event that still captures authors’ imaginations.’
-World Literature Today

‘I was drawn in by the characters and very touched their stories...’
-Sainsbury's Summer Book Club