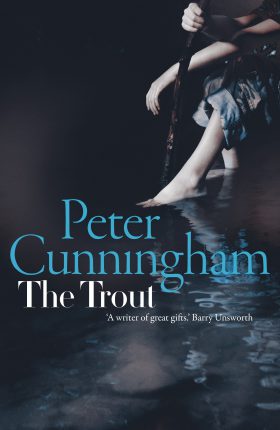 Alex and Kay began their relationship many years ago in Ireland. His father, a well-respected doctor, is immensely proud of him until the day Alex meets Kay, a meeting which changes Alex’s life and his relationship with his father forever. Rejected by his father and his friends, Alex and Kay eventually settle in Canada to lead a normal family life. Normal life, however, is only a thin veneer covering a world of childhood secrets and lies and a letter arriving out of the blue triggers a long-buried guilt in Alex, leading him to risk all to track down its secrets. In a spellbinding story of one man’s search for the crucial secret locked in his memory since childhood, The Trout bursts up through the conventions and falsehoods of the past and hangs, beautiful and shimmering, in the clear and vital light of truth. 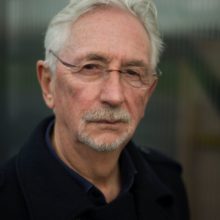 Peter Cunningham is from Waterford in the south east of Ireland. He is the author of the Monument series, widely acclaimed novels set in a fictional version of his home town. His novel, The...

‘The charm of this novel lies in beautifully rendered observations of small, still moments. Cunningham knows exactly how to cast line after line with a deftness and grace that summon the truth from the depths of the past up to the surface, at last.’
-The New York Times

‘Peter Cunningham’s superbly crafted psychological thriller echoes the terse battle of wits between a wily angler and a wilier trout who has mastered how to hide unseen in plain sight.It is a masterly study of a man whose life is turned upside-down by childhood secrets in an Ireland where evil could hide in plain sight because nobody had the courage to confront it. Now the consequences of his past must be confronted, no matter at what danger to himself and to those he loves. Packed with canny and uncanny insight, The Trout grows into a mesmerising read.’
-Dermot Bolger

‘A poet walks through these pages weaving time past and time present into sadness and grace.’
-Paul Lynch, Red Sky in the Morning and Black Snow

‘Cunningham’s engaging novel challenges us to create our own metaphors so we may, like the trout, raise our head above the surface towards truth.’
-The Sunday Times

‘The reader is never less than fascinated.’
-The Irish Independent

‘A perfect storm of a novel . . . The Trout is a film in waiting.’
-The Irish Daily Mail

‘This is a well-crafted crisply written, gripping story.’
-The Irish Times

‘Hooking the reader with immediately accessible characters, The Trout is a ‘read at one or two sittings’ story. The gentle familiarity of the characters deceives while several layers of tension are introduced. ’
-Bord Gáis Energy Book Club, Book of the Month

‘The strong characters, the excellent pacing, the sense of mystery, the undercurrent of menace and the beauty of the writing all come together to such you in- in what is essentially a perfect storm of a novel. ’
-Irish Daily Mail

‘With its woven motifs, its tragic memories and its reflection on the quest for beginnings, The Trout subtly explores an existence forever marked by a childhood trauma. The precise and masterful use of suspense makes this a thrilling and emotional novel.’
-Le Mond, France

‘This sensitive and liberating investigation shows how hidden trauma, silences and lies can ruin a life, many lives.’
-Ouest France

‘The subtle construction of this novel about trauma is supported by a writing which, also, hides behind appearances, as descriptive and vigorous, as psychological and poignant as the fear of a child late at night, when an adult puts a hand on his shoulder…’
-TÉLÉRAMA