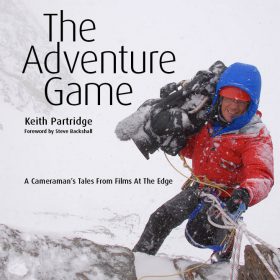 The Adventure Game
A Cameraman's Tales from Films at the Edge

Keith Partridge has been one of the world's leading adventure cameramen for two decades. The BAFTA winning Touching The Void, Beckoning Silence and Human Planet are just some of the films that have taken him to the ends of the earth. If some astonishing location has amazed you on television, or you have watched a climber or explorer in some outrageous position, the chances are that Keith Partridge was there with his camera. From the caves of Papua New Guinea to the summit of Mount Everest, no location has been too dangerous, no environment too wild, for his daring and consummate artistry. In this lavishly illustrated and beautifully designed volume Keith Partridge tells his story, describes the challenges and discusses the daring adventurers he has shared with personalities such as Steve Backshall, Joe Simpson and Stephen Venables. 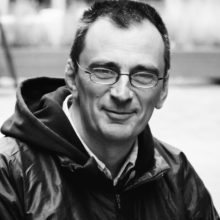 Keith Partridge was brought up in North Walsham, Norfolk and now lives on Scotland's east coast with his wife, Andrea and two children. He continues to travel the world, filming in wild and...

‘The Adventure Game's greatest strength is that of a new narrative voice encompassed in its pages. Partridge lends a unique perspective to the world of outdoor adventure by writing about his experiences while operating a film camera, a profession intrinsically linked to the industry but a view not often told. His anecdotes are engaging and unabashedly authentic. A must-read for all armchair adventurists.’
-Special Mention, BANFF Mountain Book Competition

‘Exciting and inspirational. A superb cameraman and stills photographer Keith has travelled a long way from the dusty confines of BBC House. Nothing ventured, nothing gained as they say and Keith has ventured it all.’
-Joe Simpson, author of Touching the Void

‘Keith Partridge is to my mind one of the greatest adventure cameramen in the world.’
-Steve Backshall, television presenter and naturalist

‘Whether you are filming sunrise on the summit of Everest, Gallician fishermen dancing with death in the Atlantic surf or historical reconstructions on the Matterhorn, Keith is your man.’
-Stephen Venables

‘A brilliant read as well as a beautiful object.’
-The Press and Journal

‘This book is a thrilling read for those who revel in the great outdoors as well as a thoughtfully crafted extended essay on the importance of safety, planning and technical ingenuity.’
-Nick Smith, The Engineering and Technology Magazine

‘Partridge shares photographs of some of the stunning scenery he has witnessed along with a commentary of his daredevil exploits in a new book, The Adventure Game.’
-The Herald Scotland

‘He is now stepping out from behind the lens to share his stories and some of his secrets in a new book. The Adventure Game is full of photos from the edge, and includes praise from some of his subjects.’
-The Independent