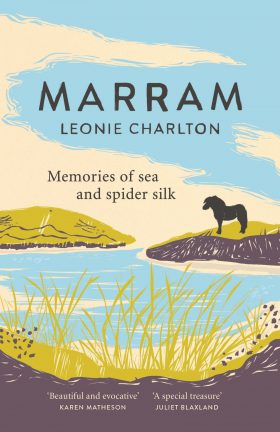 From the southern tip of Barra to the ancient stone circle of Callanish, Leonie and her friend Shuna ride off the beaten tracks on their beloved Highland ponies, Ross and Chief. In deeply poetic prose, she describes not only the beauties of the Hebridean landscape, its spare, penetrating light and its people, but also confronts the ghost of her mother and their fractured relationship. 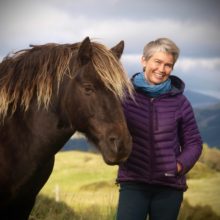 Leonie Charlton travelled extensively as a child, living in England, Africa, Wales and Scotland. She has worked as a cowgirl in Australia, an English teacher in Japan, and her degree in Hispanic...

‘An evocative look at a mother-daughter relationship, with a Hebridean backdrop.’
-The Simple Things

‘Marram is a story about love – love for a string of windswept islands, for their people and wildlife, for a couple of shaggy ponies and for a lost and parent. With an affectionate eye for the smallest detail and an indulgent ear for the softest lament, Leonie Charlton does them all proud.’
-John Keay, author and presenter

‘Tried by nature’s elemental rawness, washed with fear and despair, Marram is Leonie Charlton’s telling of a gruelling journey as she wrestles with the ragged memories left by her mother’s untimely passing.’
-Alastair McIntosh, author of Poacher’s Pilgrimage

‘What a joy Marram is!Images of place and people flood the senses in a truly unputdownable account of two journeys intertwined.A beautiful and evocative piece of writing.’
-Karen Matheson, singer with Capercaillie

‘Leonie has conjured a memorably magical world of nature and wildlife, places and people, that lingers in the imagination long after finishing the book. You don’t have to like ponies or wild islands to enjoy reading Marram, but for those who do, this book will become a special treasure.’
-Juliet Blaxland, author of The Easternmost House

‘A huge sense of accomplishment radiates from the final pages, filling the reader with affection for the writer, for what she has endured, and the things she has learned along the way.’
-On: Yorkshire Magazine

‘Beautifully and elegantly descriptive. A wonderful read that I enjoyed a great deal.’
-Pythia Reads