Grizzly Bears and Razor Clams tells the story of Chris Townsend’s walk along the 1200 mile Pacific Northwest Trail, which runs from the Rocky Mountains to the Pacific Ocean through the states of Montana, Idaho and Washington. This is a wilderness route which much challenging terrain and remote country inhabited by bears and wolves.

The trail is in its infancy; a mix of signed footpaths, abandoned old trails, dirt roads, animal tracks and cross-country hikes that made route finding and hiking often quite difficult and sometimes hazardous. Most nights were spent camping alone in the forests and mountains and the author often met no other hikers for days at a time.

With three national parks – Glacier, North Cascades and Olympic – along the way plus many designated wilderness areas the trail passes through some of the most magnificent landscapes in the USA, many of which are pictured in the book in the author’s photographs, all taken during the walk. 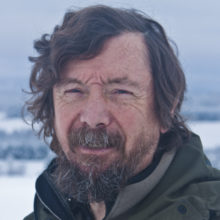 SHORTLISTED FOR TGO OUTDOOR PERSONALITY OF THE YEAR 2015 Chris Townsend writes regularly for TGO Magazine and has written 22 books on the outdoors, including the award winning The Backpacker's...